Virtual Reality (VR) is a computer-simulated environment where users are immersed in a real-life experience. The senses of sight and hearing are stimulated in a way that the user thinks he is truly part of the surroundings. In the future, I expect that senses such as smell and touch also are stimulated virtually. The concept of Virtual Reality is quite old and goes back to the 30’s where the experience has already been defined. But creating a virtual environment was a dream that was hampered by technical limitations.

(RE) EMERGENCE OF VIRTUAL REALITY

In the nineties, during the rise of video games, the concept was brought back to new life. As Sega introduced the VR-1 motion simulator, the device was able to register movements of the head and images to display a stereoscopic 3D image. Well-known examples are the red-green glasses and some modern Polaroid stereo glasses. Nintendo was a pioneer in the world of games then and brought the Virtual Boy in 1995. This was the first portable virtual reality gaming experience. However, the device was not successful due to the high price, the discomfort while playing and poor marketing.

Since the failed game systems of the eighties and nineties and the hype of 3D movie technology had continued to grow, Virtual Reality was on the verge of a real breakthrough. I believe that the year 2015 will be known as the beginning of a new era. The progress is so fast so that all the big companies are flocking to virtual reality. Oculus is, of course, the pioneer with their most famous Oculus Rift VR headset, followed by the partner, Samsung. Samsung provides the screens for the Oculus. Tech giants such as Microsoft, Apple and Sony are also working with a Virtual Reality.

The possibilities of virtual reality are endless and limited only by the imagination and technical capabilities. The most popular application is games but the virtual world is also attractive for companies, musicians and therapists. 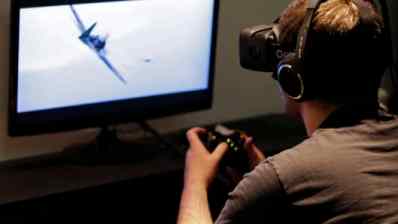 Virtual Reality gaming is going to be very large. Samsung is the only party that has already delivered VR goggles, the Gear VR. Virtual Reality games are not only available for PC and consoles but also for smartphones. The future of virtual reality games, however, looks bright with so many big parties that focus on this new market.

The next step in cinema, in my opinion, is 360 videos. These recordings are created with a camera that is able to shoot images in 360 degrees. The viewer has full freedom to direct his gaze at any point and the environment to fully take in. Jaunt VR showed the potential of this new way of filming already with several trailers of virtual reality movies. The company demonstrated among other war films, horror film, and a Godzilla-like experience.

However, there are some disadvantages to this way of filming. Most importantly, the action takes place in 360 degrees which makes it difficult to direct the movie. You never know where the audience looks around, which means that there are chances to miss important events in the movie. However, the potential of VR-cinema is great and I think we’ll see the first full-length virtual reality movie soon.

Just like the Hollywood, companies are also embracing the use of 360-degree video. The making of a 360-degree video is a unique way to display a shop, factory or project. The involvement and interaction are immense and provides a unique perspective.

YouTube started to support 360-degree videos last year. The biggest obstacle, however, is the limited availability of 360 video cameras. But times have changed quickly. Through the YouTube website and the android app, it is possible to see 360-degree content. Through the app, you can look around by moving your phone.

To experience a concert in virtual reality is something which will be the revolution in a few years. Recording of concerts and performances can be done with 360 cameras that are placed in various places. Then people can choose from where they want to see the concert. Paul McCartney made all recordings of a concert last year with Jaunt VR. I saw a trailer and was immediately attracted. The image quality was disappointing but the experience itself is the next best thing. The sound also moves 360 degrees along which makes for a very intense experience.

When developing new products, 3D models are often used. The opportunity to see these products in virtual reality makes building complex machinery a lot easier. Virtual Reality also offers a solution for development of projects and industries. While architects and engineers are able to work with technical drawings, they are often incomprehensible to the layman. Converting these to a 3D model allows workers and future residents to stroll through a virtual environment.

Simulation has been used for years to prepare law enforcement officers and specialists in different situations. Pilots, soldiers and even police officers can be trained in a digital environment where they safely intervene with life-threatening conditions. The military already uses the full potential of Virtual Reality. The use of portable VR goggles, gloves, suits and virtual weapons make the training realistic.

Virtual Reality can also be used for peaceful purposes. It is possible to simulate all kinds of virtual environments making it possible to deal with all sorts of fears. A room full of spiders, a tall building or an area packed with people. It’s simple to create situations safely to face patient’s fears. Virtual Reality is already been used to treat post-traumatic stress disorder in soldiers. I think, in the future, many doctors and psychiatrists will use the therapeutic applications of Virtual Reality.

Looking around in virtual reality is simple with a VR glasses and feels like a real-life experience. Moving is not. Currently, you can navigate through cyberspace using a controller and mouse. To simply get up and walk around is in principle possible with cameras that record your movements or a so-called bodysuit. The biggest obstacle is that you cannot see where you’re going. Navigation is an aspect that should be further developed to provide a truly immersive experience. Fortunately, there are several companies that are already engaged in virtual reality controllers that move a lot easier.

This is a treadmill that registers movement. Stooping, walking and turning, it’s all possible with this unique device. The movement is immense and makes for a truly unique experience. In combination with a VR glasses and a virtual weapon, this is a perfect accessory to play shooters like Battlefield.

This is a full body suit that records all body movements using sensors. There are no cameras or other gadgets required. This is, in my opinion, one of the coolest controllers that really have freedom of movement. This device has been in the market for a while and records the movements of your hands using a special camera. It doesn’t have full freedom of movement but it is a lot better than a standard controller.

Virtual Reality will become the media revolution of the next decade. As with any new technology, this will also take time to grow and find its way into the mainstream. However, I am convinced that Virtual Reality, in about ten to fifteen years will be as big as the Internet is today.

skipperJuly 28, 2020
How to Buy Wireless Router for Home Apartments and Office? Easy Guide
7 Reasons to Choose PC Gaming Over Console